I am thrilled and honored to annouce that I have been accepted as an Exhibiting Member of Piedmont Craftsmen's Guild!

Good thing I finished this neckpiece with like a day to spare. 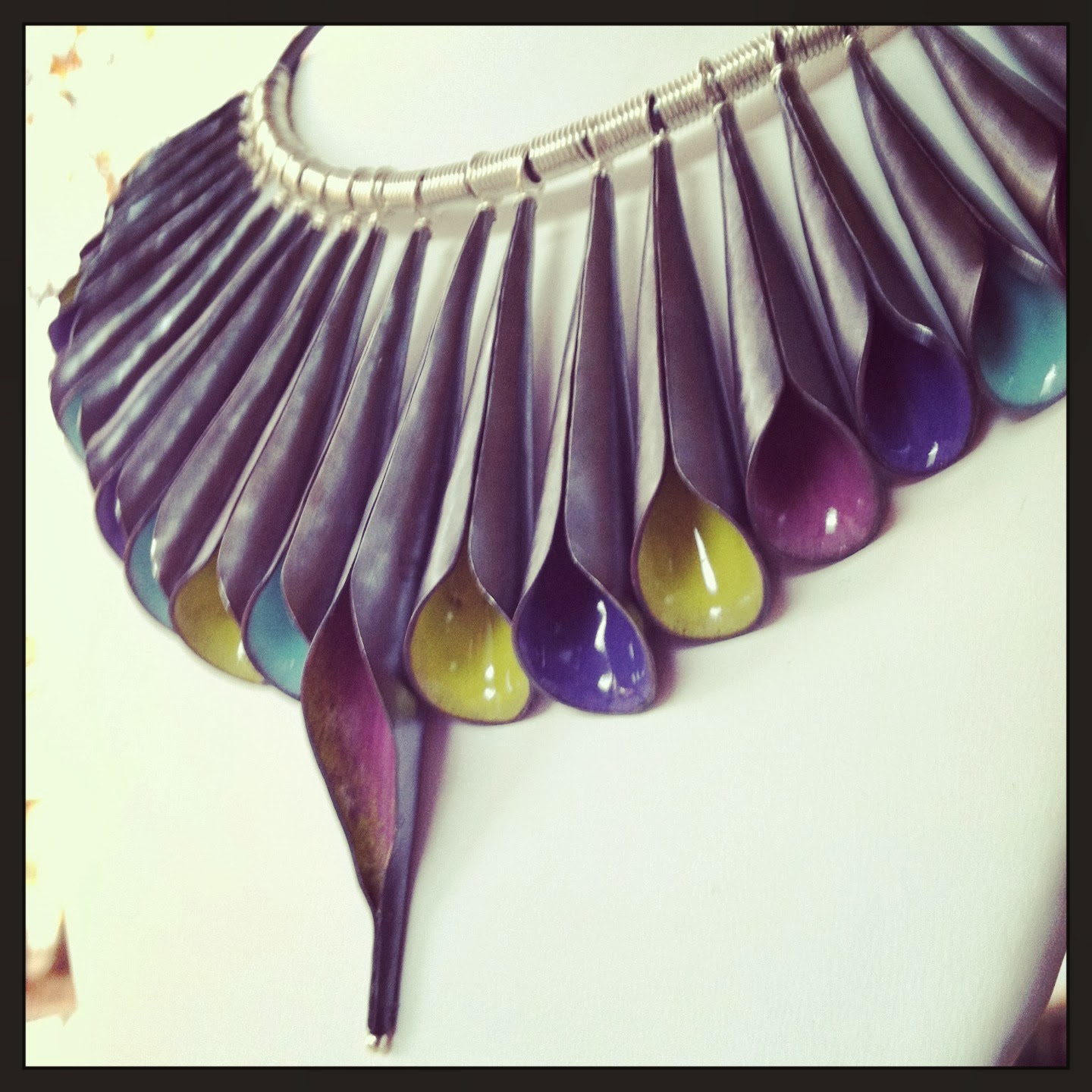 When I first moved to Winston-Salem after college, my first job was as a gallery assistant at the Piedmont Craftsmen Gallery in the downtown arts district.  The gallery features work of the over-300 exhibiting members of the guild, and it was so inspiring to be in the presence of such beautiful work from amazingly talented craftspeople from throughout the Southeastern region of the US.  Now, 10 years later, the guild has nearly 400 members and encompasses the whole United States.

The jury process is rather rigorous.  It's a two-part process: image jury and object jury.  In the spring, the Image Jury opens, and prospective members can send in 8 images of their work to be reviewed by a jury of craftsmen members form every major craft field as well as board members and supporting members.  This is difficult in itself, as it's hard to know what each jury is looking for, as it varies from year to year.  This was actually my third time applying to the Image Jury, but the first time I was invited to continue on to the Object Jury.  The first year I applied, I showed a huge range of portfolio work, from jewelry to large raised vessels.  I was told after the Image Jury when I wasn't selected, that I had good scores, but not quite high enough to be invited to continue, that I had maybe tried to show too much of a range, and they were looking for a more cohesive body of work.  The next year, I showed work all from the same line, my SeaPods Collection, but included a few of the smaller, more production-oriented pieces.  That year, they said that again I had one of the higest scores of those not invited, but that they were looking for more unique "show-stopping" work.  So this year, I submitted images of large neckpieces from my solo show plus a couple of older pieces that fit with and actually inspired that collection, and it worked!

So, if your work is selected by the Image Jury, you are then invited to participate in the Craft Fair in November, either in a solo full booth or in a group booth for the Object Jury, where the jurors come around as a group and discuss and scrutinize your work and then vote on whether or not they think your work is up to the standards of the guild and if you should be invited to be an exhibiting member of the guild.

I chose to do the group jury booth because:
1. I felt like I could best represent myself with five show-stopping pieces that were super well-crafted and cohesive as a group rather than trying to pull off a cohesive booth with all of the different lines of jewlery that I make.  They like cohesiveness, those jurors.
2. I didn't have all of the displays and fixtures required for a high end craft fair booth, and I wasn't sure I could pull it all together in time monetarily in addition to making all of the work necessary to fill a full booth - you need a LOT of jewelry pieces to fill up a booth, let me tell you...

Well, I'll be honest here because that's the whole point, right?  I had a crazy busy Fall.  That's why I haven't posted since August.  It was good, don't get me wrong, but craaaaazy busy.  And I suddenly realized - on October 30th - that I had written the wrong date on my calendar and that I had 2 weeks instead of almost a month left to make the two pieces I really wanted to make to go with three pieces that I had made earlier in the year for my show at Quirk.   Also, I had a smaller indie craft show scheduled for the weekend before and a trunk show scheduled for the day of installation at Piedmont Craftsmen.

Panic at the freakin' disco. 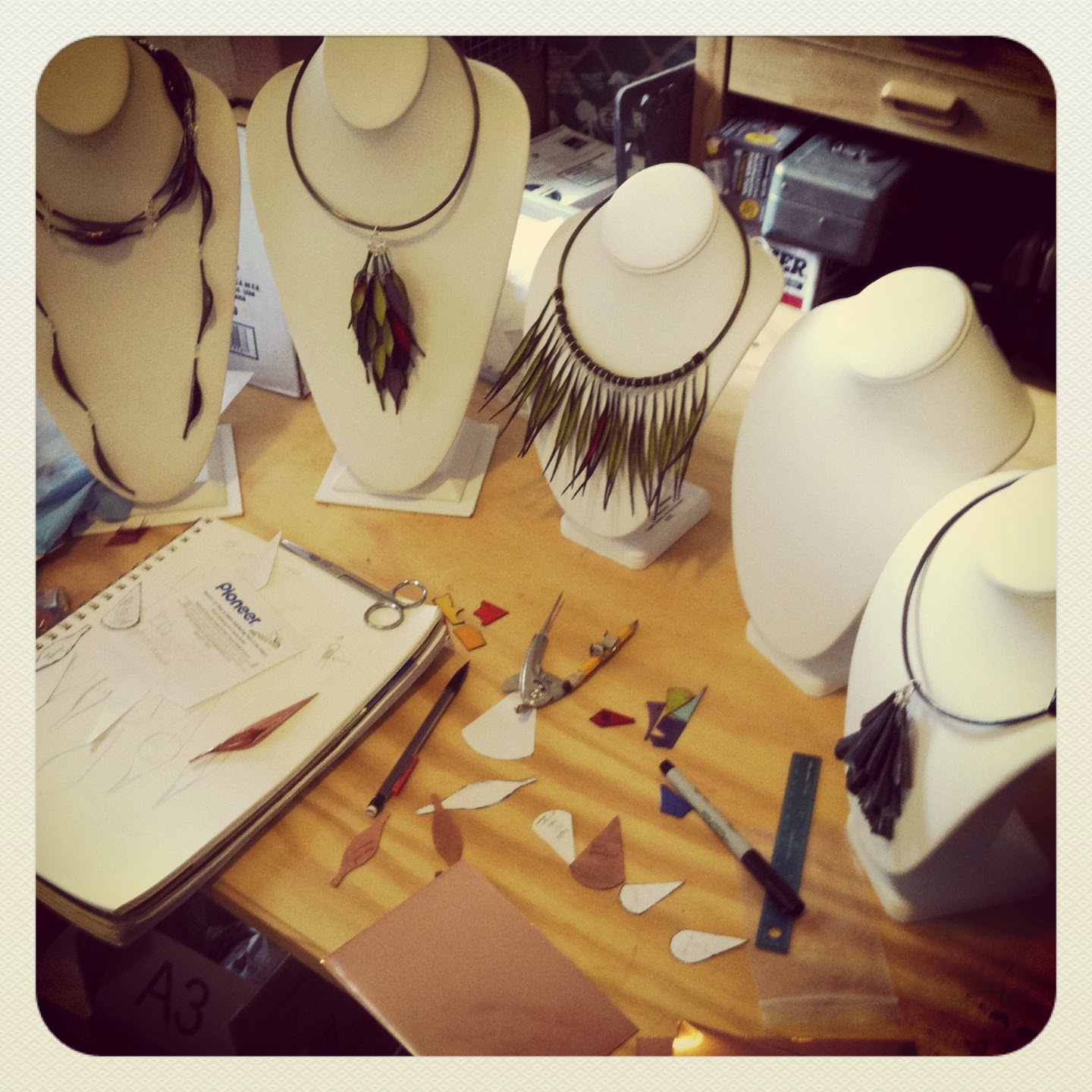 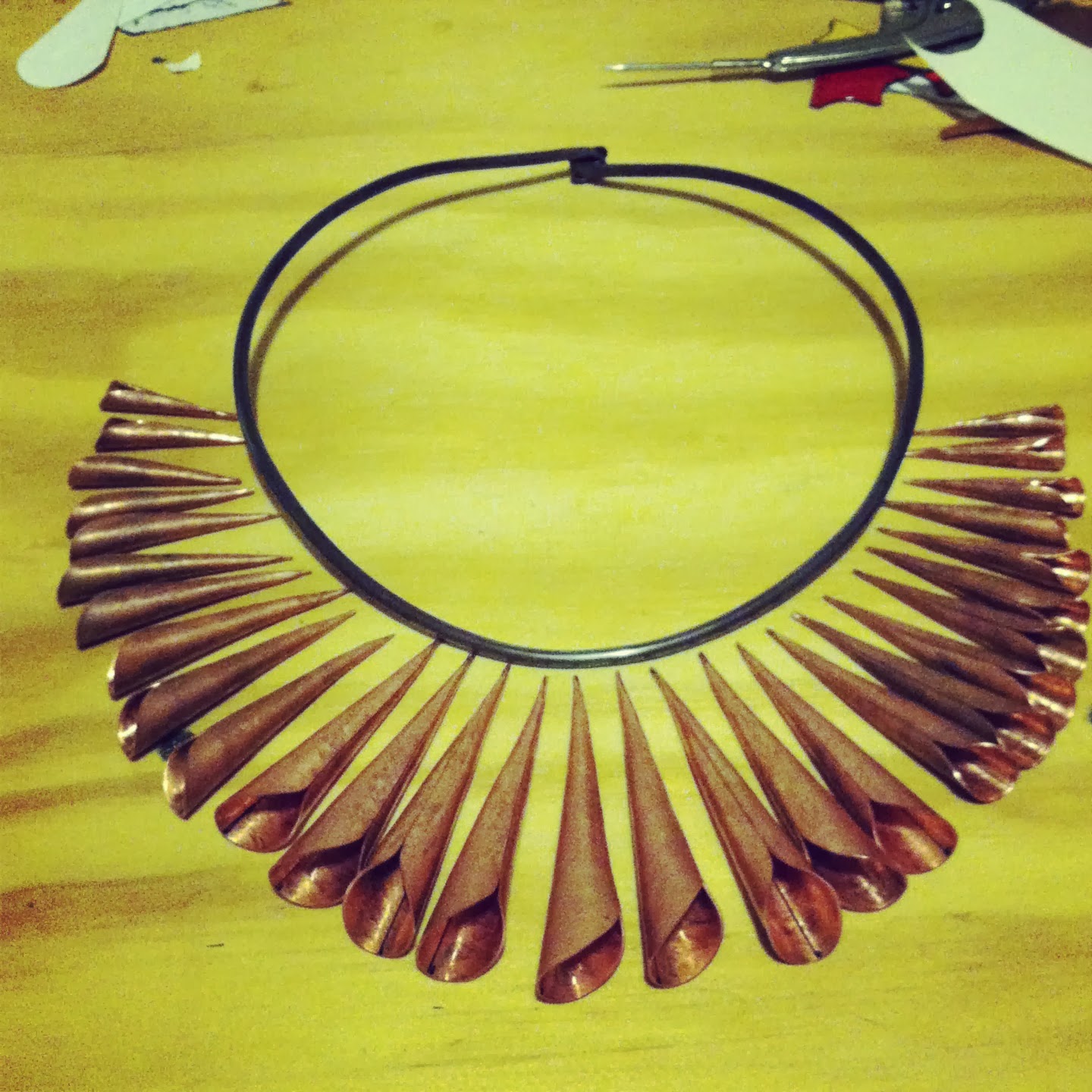 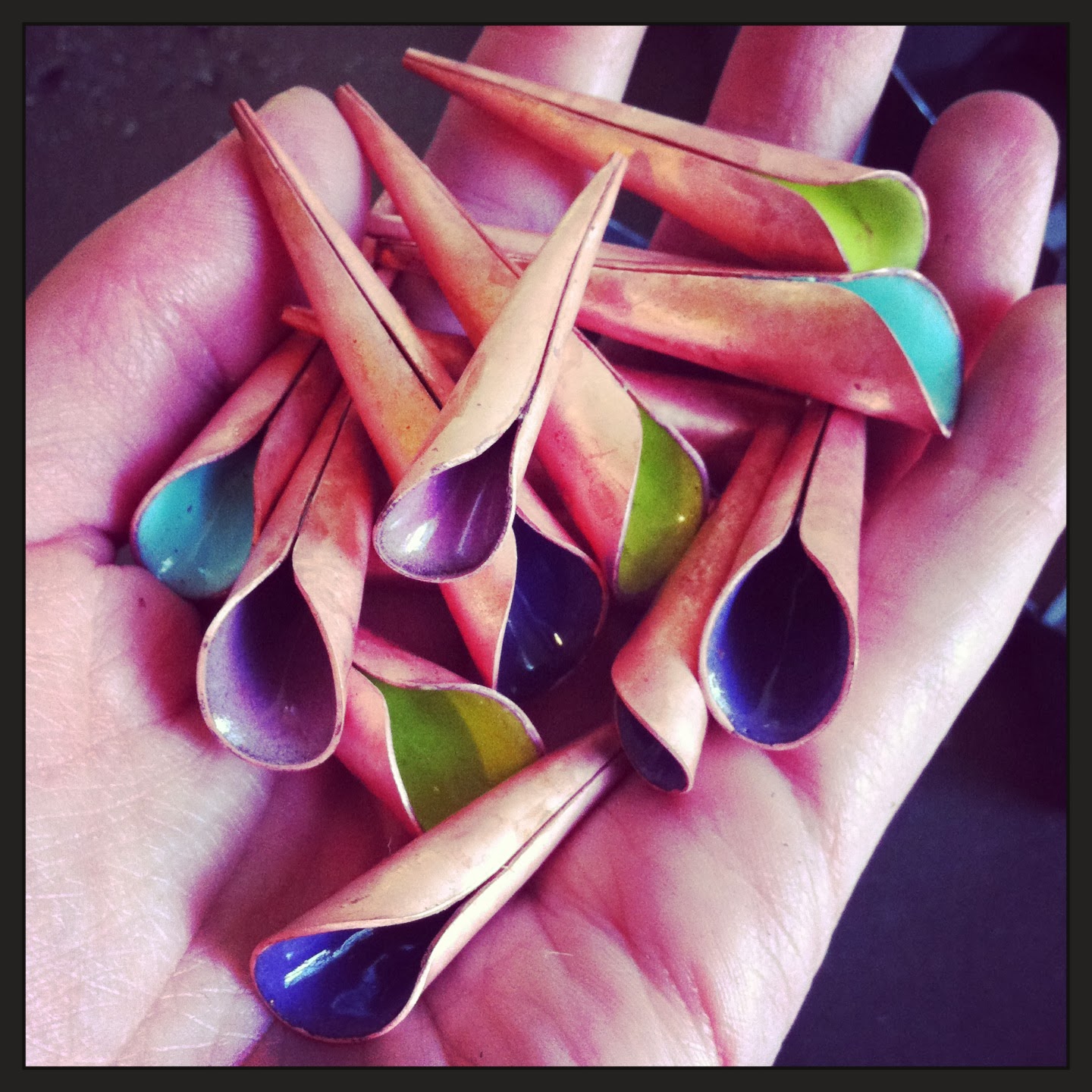 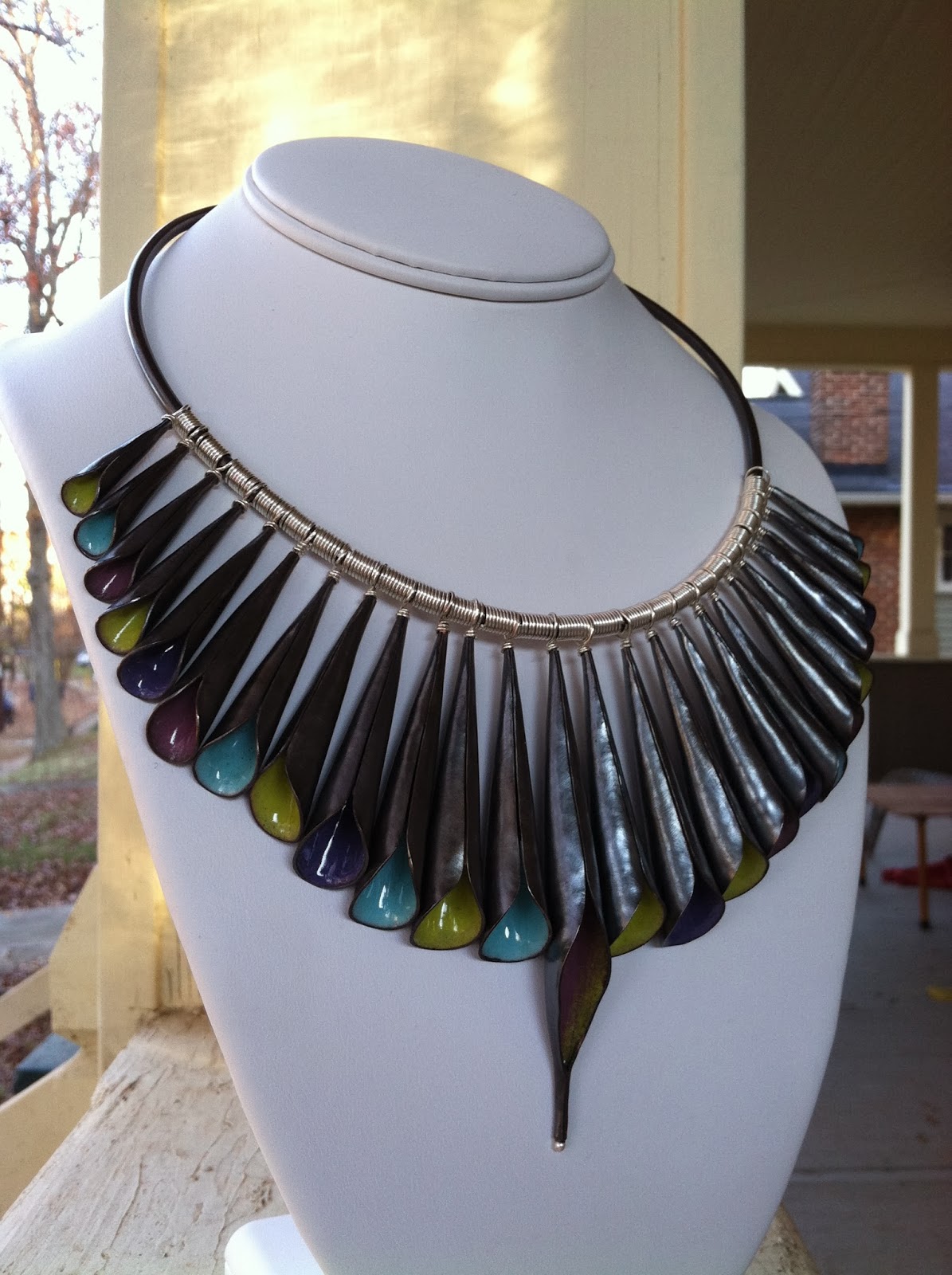 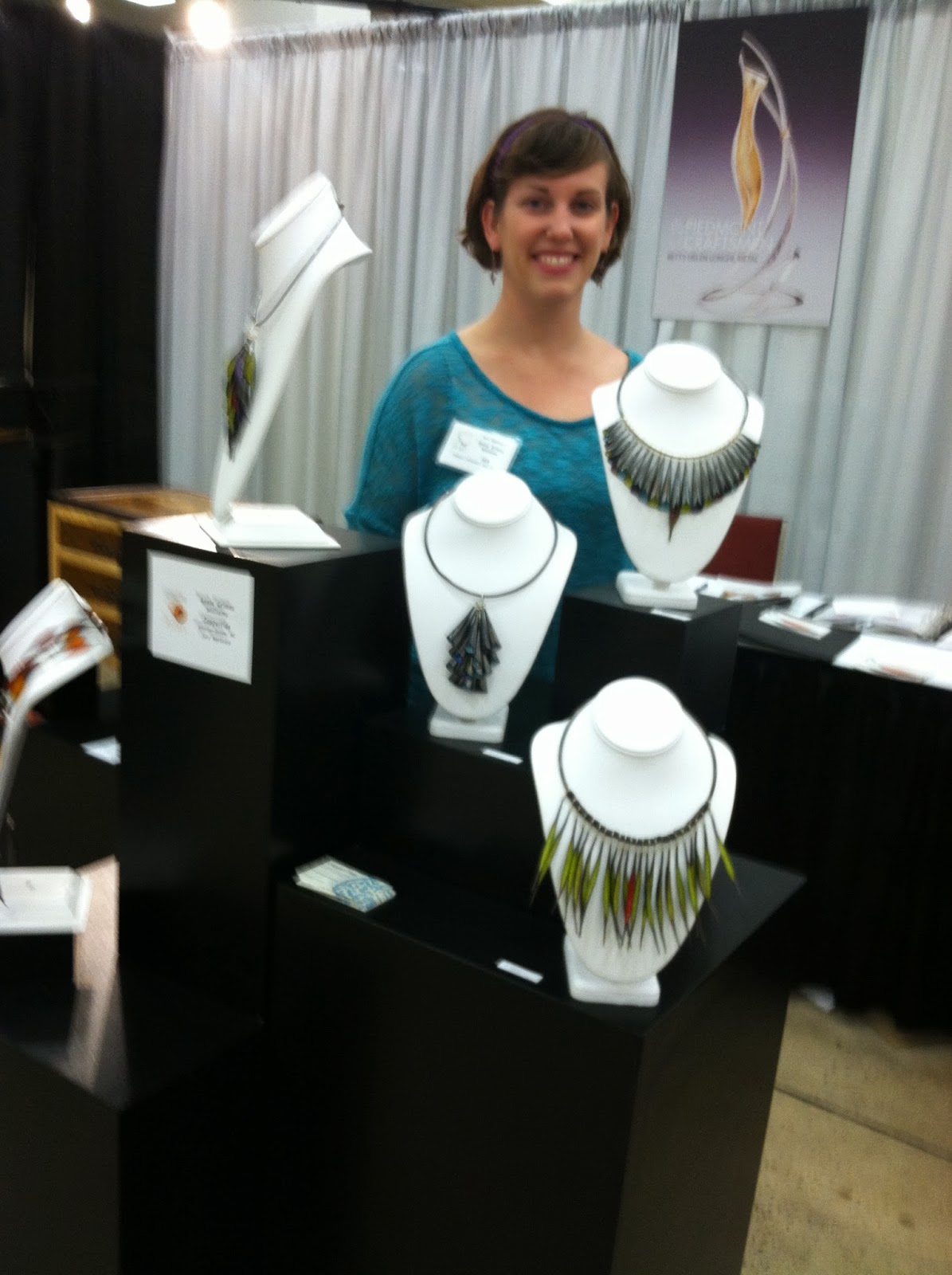 yaaaaaayyyy!!! (this is the look of relief.) 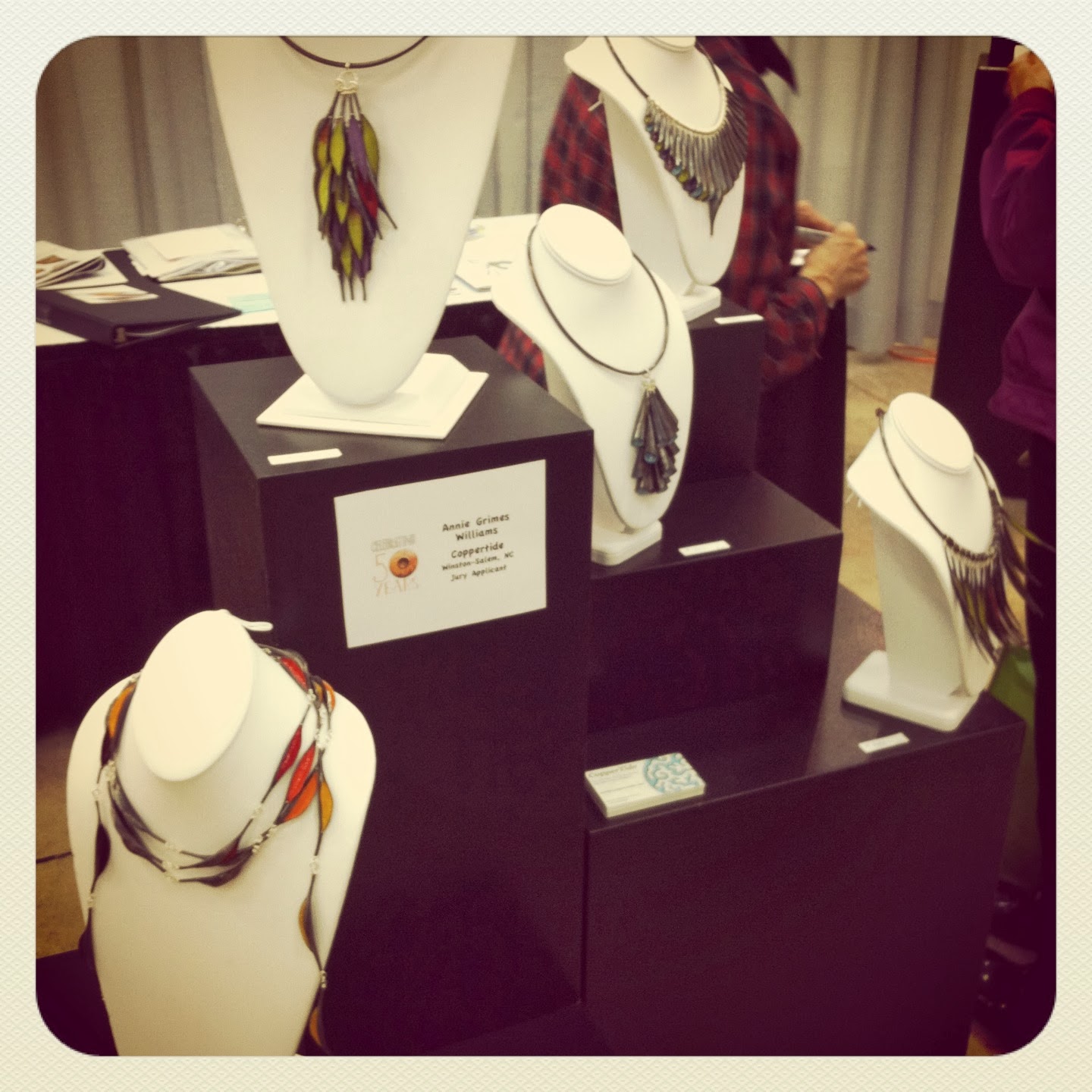 Not a bad way to end the show season. :)

So thanks to everyone, my wonderful family and friends, my fabulous students, my network of amazing jewelers and craftspeople for all of your support through the ups and downs.  It's been a good year.  It was the year of my first solo exhibition, the year we bought our first house, the year I was accepted to a prestigious craft guild, and by far my best year (yet!) business-wise. I'm a pretty lucky girl. So on to 2014!  I hope it's wonderful for you all!
Posted by CopperTide at 6:51 AM
Email ThisBlogThis!Share to TwitterShare to FacebookShare to Pinterest
Labels: annie grimes williams, art jewelry, craft fair, craft guild, exhibition, high end, metalsmith, neckpiece, PCI, piedmont craftsmen, seapods, winston-salem, year in review

CopperTide
Winston-Salem, NC, United States
My name is Annie Grimes Williams and I am the Artist/Owner of CopperTide Fine Metalwork and Enameling. My work has a fun and funky quirky colorful style, and I'm really looking forward to growing and expanding my jewelry business in the coming months. I live in Winston-Salem, NC with my husband Mark, our cats Gabardine and Pinkerton, and our dog Buster. I work out of my studio in our home, and despite the distractions of life, I'm working hard on my career as a metalsmith. Please follow my blog for updates on my progress as well as tips and tricks I learn along the way.

Promote Your Page Too